The forgotten “Father of Wireless Technology”

It starts way back in 1862, when the Scottish theoretical physicist James Clerk Maxwell mathematically predicted the existence of electromagnetic waves, the underlying basis of most wireless technology. Alas, he died in 1879, before his prediction was experimentally verified. It wasn’t until 1889, that one Heinrich Hertz managed to demonstrate their existence, and thus begins our story…

Fast forward half a decade and Guglielmo Marconi is credited for inventing the world’s first “Wireless Telegraph” – demonstrating it to the British Government in 1896 (after the Italian government dismissed his claims, even recommending he be referred to an insane asylum).

He went on to transmit the world’s first ever wireless communication over open sea in 1897 and was then responsible for first installing it on an ocean going vessel in 1899. His company, Marconi International Communication Co. installed and manned the radio on the RMS Titanic’s fateful voyage – Britain’s postmaster-general summed up, referring to the Titanic disaster: “Those who have been saved, have been saved through one man, Mr. Marconi…and his marvellous invention.”

Such was his invention’s success, he received the Nobel Prize in Physics, went on to be appointed Honorary Knight Grand Cross of the Royal Victorian Order and died with the title of the 1st Marquis of Marconi.  Laid to rest via an Italian state funeral in 1937 – all BBC transmitters and wireless Post Office transmitters in the British Isles observed two minutes of silence in his honour.

Rewind to November 1894 and the Town Hall of Kolkata, in India. A public demonstration took place, witnessed by Lieutenant Governor Sir William Mackenzie. Details of the apparatus used are sketchy at best, but a man by the name of Jagadish Chandra Bose, managed to ring an electric bell and ignite a small charge of gunpowder, whilst at a distance of 23 metres. The people in attendance were awestruck by the demonstration, especially when, during a daring feat of showmanship, the “invisible light” passed through the body of the Governor of Bengal. 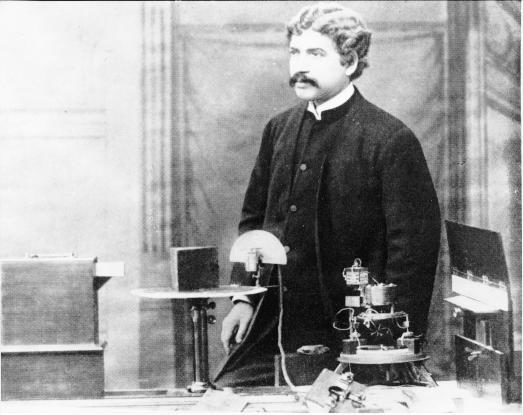 J C Bose had demonstrated the use of microwaves – instead of the low and medium frequency waves that Marconi would go on to work with. Inspired by the work of James Clerk Maxwell and Heinrich Hertz, he recognised very early on how shorter wavelengths made it easier to explore the properties of radio. Unfortunately for the history books, Bose was not interested in making a profit from his work and flatly refused to patent his inventions, simply stating that “ideas should be shared freely”.

He went on to develop and perfect the coherer (a form of radio signal detector), with his improved coherer design “miraculously” appearing in Marconi’s transatlantic wireless receiver. Over the years, Marconi’s story of how he himself designed the coherer varied, coinciding with reports that Bose had his circuit designs stolen from a London hotel room a couple of years before. Regardless, Bose was just not interested in securing the rights to his invention and Marconi would go on to take credit for and patent the design himself, setting in motion the history that would cement him as the father of wireless.

Bose next moved his attention to semiconductors, discovering that different substances either increased or decreased current flow and was the first to create and use a semiconductor to detect radio waves. It would be decades later when William Brattain, who was the co-inventor of the transistor, credited Bose with inventing the first “semiconductor rectifier” – a basic transistor. The “first” transistor radio wasn’t officially demonstrated until 1947…

Despite J C Bose inventing various now-commonplace microwave components, further work involving millimetre wavelengths was almost non-existent for the following 50 years. In 1977, Sir Nevill Mott, Nobel Laureate, remarked that “J.C. Bose was at least 60 years ahead of his time.” A 1.3mm multi-beam receiver, now in use on the National Radio Astronomy Observatory’s 12 Metre Telescope in Arizona, incorporates concepts from Bose’s original 1897 papers, with many of his instruments and inventions remaining largely in use some 100 years later.

On 14 September 2012, his experimental work in millimetre band radio was finally recognised as an IEEE Milestone in Electrical Computer Engineering. Yet it is only now, that Jagadish Chandra Bose’s place in history is being re-evaluated as the true “Father of Wireless”, although given his position on sharing his ideas freely, it can’t really be a surprise it’s taken this long. His inventions were his gift to the world and he seemed content with letting others capitalise on his genius.

For more information about moving to a wireless leased line solution, contact us today

Our People: “This is a company that wants people to be passionate about what they do”

Whitepaper: The future of business communications

How IaaS is changing the nature of business

We use cookies to ensure that we give you the best experience on our website. If you continue to use this site we will assume that you are happy with it. Privacy policyOk